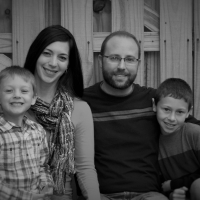 Following graduation Dr. Grondin attended Palmer College of Chiropractic in Davenport, Iowa where he received Palmer’s highest academic honor, Valedictorian of his class. During his studies at Palmer College, Dr. Grondin received the Presidential Scholar Award, was inducted into the Pi Tau Delta Honor Society, and served as the Vice President of the student Activator Methods club. After receiving his Doctor of Chiropractic degree Dr. Grondin, along his wife Stephanie and their son Cooper, returned home to Maine and their family was later blessed with the birth of their son, Cody. Dr. Grondin is proud to own and operate his private practice, Capital City Chiropractic, in Augusta Maine where he has helped thousands of fellow Mainers enjoy a healthier life since 2006.

Douglas M. Perry, D.C. was born and raised in Augusta, Maine and is a graduate of Cony High School. He attended the University of Maine at Augusta where he earned a Bachelor of Arts degree in Biology and an Associate of Arts degree in Architecture.

Dr. Perry attended New York Chiropractic College in Seneca Falls, New York where he received his Doctor of Chiropractic degree and his Master’s degree in Clinical Nutrition. Upon graduation Dr. Perry, his wife Bethany, and their daughter Paige returned home to Maine where their family welcomed their daughter, Olivia. Dr. Perry has been practicing in Maine since 2010. He is also an avid outdoorsman, enjoys hunting, fishing, antique automobiles, and spending time with his family and their dog, Loki.